P.H. NEWBY says that nine tenths of his energy is devoted to the BBC, where he is controller of the Third Programme. With what is left over he has written 17 novels, a book of criticism, and a biography of Maria Edgeworth, and has edited a selection of stories from “The Thousand And One Nights.” The seventeenth novel, “Something to Answer For”, published by Faber and Faber, has just won for him the first Booker Prize for Fiction, worth £5,000, which was presented in London last night.

He regards himself as a very old-fashioned novelist who does nothing that Conrad would not have thought old-hat; he has a story to tell and likes to make his meaning clear. But this is deceptive. He is a subtle and demanding writer, full of close meanings. He thinks of modern novelists as either historians (like C. P. Snow who, he says, regards himself as a latter-day Trollope) or poets (like Malamud or Irisi Murdoch). Mr Newby, then, must be classified as a good deal more poet than historian.

He was born in 1918 in Sussex at Sir Arthur Conan Doyle’s house which was then being used as a nursing home, and went to grammar School at Worcester and teacher training college at Cheltenham, qualifying in time to be called up in 1939 and sent to France with the British Expeditionary Force. He went to Africa, and was a corporal stretcher bearer with the Eighth Army until just before Alamein, when his was seconded as a lecturer in English literature to the Fouad I University in Cairo.

In 1946, he came home, published his first novel, and wrote reviews and short stories for “Encounter,” “Lilliput” and “Mademoiselle” a glossy American teenage magazine which regarded literature as an object of fashion and had the distinction of first publishing “Under Milk Wood.” He reviewed for the “Listener.” receiving 15 guineas for 1,500 words but making much more than that by immediately selling at half price the 50 or so novels sent to him each week.

In 1949 he joined the BBC as a sound talks producer, working mostly on historical and literary programmes with names like “First Reading.” He once produced Robert Oppenheimer when he was giving the Reith Lectures under the title “Science and the Common Understanding,” but could not see the talks until four days before they were broadcast, had no time to adapt them for reading aloud, and now thinks little can have been commonly understood.

He began writing early. Two novels written when he was 18 and 20 were unpublished, but after the war, he was quickly successful. His first novel in 1946 won a Rockefeller Foundation award and his second the Somerset Maughan Prize; later he was given, a fellowship to travel all over the United States, and last year the novel which has now won him £5,000 was chosen as the “Yorkshire Post’ book of the year.

“Something to Answer For,” which is perhaps really, about the way a man’s spirit changes under stress and how he comes eventually to believe that no one but himself is responsible for his own conscience, is set like many of Mr. Newby’s books, in the Middle East. Did his stay there make that much of an impression on him? “A determinate impression,” he says. Oriental life was so much more explicit and extravagant that it was like living in a human laboratory. People talked about the mysterious East, but London was much more mysterious than Cairo, where there were no inhibitions. A stranger would ask who your parents were, why you were there, and how much you earned. His students demanded to know why he was not married and whether he was a homosexual. He said he was not homosexual, and was engaged to a girl in England. He knew members of the Egyptian royal family and people from the slums. Everything was extreme.

Then there was the Arabic love of language which was used with a relish now unknown here. He well remembers a man who used to go about the streets of Cairo, his voice raised in measured ecstasy, selling bits of wire to clean Primus stoves. “You, meet people,” he says, “who get into a sentence which will not allow them to escape before they have offered you their house.” He was once at a party when he was unwise enough to tell his host he had a magnificent house, “My dear Newby,” he replied, “It is yours, I insist.” For a moment the man meant it, Mr. Newby thanked him and accepted, and neither mentioned the matter again.

Mr Newby believes the novel nowadays is in a bad way. The Victorian novelist was an entertainer, a man to whom all people, prime ministers and kitchen girls, looked to have their imaginations fed. He had an awareness of being read by states: men and scientists, But now the novelist was only one of many entertainers, and was swamped by films and television. If a man was single-mindedly to devote himself to novels-and to write a novel meant being alone for two years putting down words on paper-then he had to be sure that what he was doing was important, that someone might read his books when he was dead. This confidence could be attained only by a consciousness of addressing a whole range of people throughout society. Mr Newby is a successful novelist, who sells 8,000 to 9,000 copies of each book, a lot more than most writers, but his private nightmare is that his only readers are old ladies.

Back in 1950 Mr Newby wrote that the English mind was fast becoming, self-conscious about money. He still thinks that a novel which made explicit people’s greed for money might be shocking to some. He himself is a little reticent about money. When I asked what he would do with the £5,000 he said perhaps build a new study, but when he was first told he had hardly dared to think about it because any day the Publishers’ Association might have telephoned and said they were terribly sorry but the letters had got mixed up and the winner was someone else. “And I should have said, ‘that’s quite all right.’” 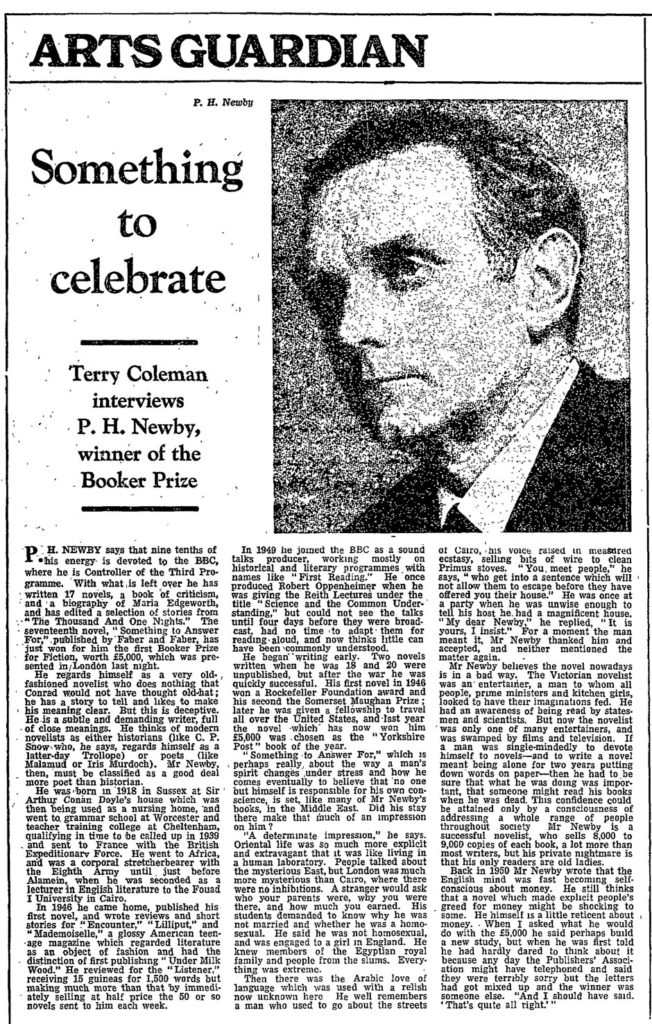